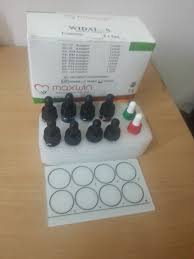 What is the uses of IVD Reagents?

IVD Reagents test kits helps us to determine the state of health, to cure or treat any ailment. In simple terms, the reagents, instruments, and systems used to find out diseases are IVDs. Without these, theÝlab blood testÝis impossible. Without theÝASO CRP Lab reagents ;Ýpresence, the lab's existence will be in total jeopardy. So, usage of the Laboratory reagents is mandatory. On the other hand, we look for theÝMajor lab ivd kits exports of Anti ABD reagents test kits whichÝdetermines the ABO Blood group's presence in red blood cells. Now, let's learn about the different tests used to find out various diseases. following are the major types of methods used in lab.

Firstly, we shall learn about theÝWidal test. This test makes a presumptive diagnosis of Typhoid using Widal febrile Antigen TOTH. But nowadays, the technique has faded away in nations such as the United States of America. The method is easy to perform, but the reliability has come under scrutiny. The other name of Enteric Fever is Typhoid. It is a life-threatening illness caused due to infection with the bacteria named Salmonella Entrica. This bacteria usually transmits through drinks and food comprising of fecal matter. Some typhoid affecting countries such as South Africa, Nigeria, Mali, Cameroon, Somalia, Jordan, Peru, Cote d'Ivoire, Chad, Chile

The other name of Human Brucellosis is Diurnal or undulant fever. It is a common febrile illness caused by infection with bacteria of some Brucella species abortus/melitensis). This undulant fever associates itself with variable and non-specific symptoms such as chills, fever, sweats, and anorexia.ÝDetecting Specific antibodies to the Brucella species is possible in a few weeks after exposure. They are of considerable importance in the diagnosis of Brucellosis. Data related to the titer of antibodies can be acquired by using specific Brucella antigen suspension. TheÝbrucella antigenÝtest kits used in a blood test to find Brucellosis. This bacteria affects humans, dogs, and other livestock. It is rare in the USA, but it is found more in Latin America, the Middle East, and the Mediterranean. Brucellosis has various other terms such as Undulant fever, Bang's disease, and Gibraltar fever.

This method is an essential tool in the field of diagnostic chemistry. It determines undetectable serum proteins that can never found in traditional clinical chemistry techniques. Immuno-turbidimetry also employs the old antigen-antibody reaction.

Serology is the method to examine blood serum concerning the immune systeme's response to newly introduced elements or pathogens. It is used in the diagnostic identification of antibodies in the serum.

Check out Our Pharmaceutical Products

Have any question or need any business consultation?